Nearly 25% of parents turn their child forward facing too early, even before the child turns 1.

Recent University of Michigan surveys asked a randomly selected group of parents with children between the ages of 7 months and 4 years about when they transitioned their child to a forward-facing car seat. 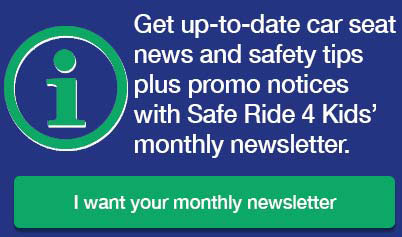 Two surveys took place, one in 2011 and one in 2013. And while the numbers were better in the second survey, still too many children are being turned forward facing too early. Here’s the numbers:

The recommendation is to keep children rear facing for as long as possible until the child outgrows the rear-facing limits of the child restraint. Sometimes this may not happen until a child is 3 or 4 — sometimes even older.

The American Academy of Pediatrics guideline — since March 2011 — is to keep the children rear facing until they are a minimum of 2 years old. Using a rear-facing car seat longer reduces the risks of serious injury.

While the child is rear facing their whole back, neck and head are being supported by the seat in the event of a crash. When turned forward facing, the child is being restrained by the harness strap and they lose the neck and head support. This increasing their risk of spinal and neck injury from the still heavy head being thrown forward in a crash.

“Getting parents to delay the transition to a forward-facing seat still represents an opportunity to improve passenger safety in the U.S.,” says lead author Michelle L. Macy, M.D., M.S., of the University of Michigan’s C.S. Mott Children’s Hospital.

“There are lots of reasons why parents are eager to change from the rear-facing to forward-facing seat: the perception their children are too large, the desire to see their children when driving, and a greater ease of removing their children from a forward facing seat,” says Macy. “But delaying the switch can make a big difference. In Sweden it is culturally accepted that children up to age 4 are in rear-facing seats and child traffic fatalities are among the lowest in the world.”

We want to know, at what age did you turn your child around? Share your comments below.

Copyright 2015 Safe Ride 4 Kids. All rights reserved. This material may not be published, broadcast, rewritten or redistributed without permission.