This is our oldest in 2008 when he was almost 3 and still rear facing.

While child passenger safety technicians and the American Academy of Pediatrics has long been recommending that parents keep their children rear-facing past age one, more states are finally changing their laws to require it.

The best practice recommendation from car seat safety experts is to keep your child rear facing for as long as possible — until the child outgrows the seat by height or weight — but at least until age two.

What is pushing states to change car seat laws? 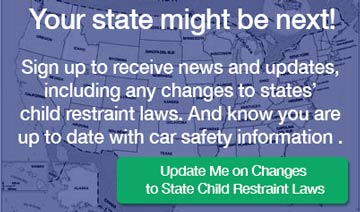 Studies have shown that children riding in a rear-facing car seat are 5 times safer. This is because when rear facing children’s backs, necks and heads are all being supported by the seat during a crash. Once they are turned forward facing their bodies are being restrained by the harness straps but their necks and heads are left unsupported experience the crash energy.

Before age 2, a child’s skeletal structure is simply not protective enough to handle the impact of a crash when they are facing forward in a car seat.

“According to medical professionals, the heads of young children are heavier, and their necks and spinal cords are not fully developed. In an accident, young children facing forward have a 75% greater chance of injuring their spines or even breaking their necks, due to impact,” said California Assemblywoman Cristina Garcia.

If the child is less than two years of age, the child shall be properly restrained in a rear-facing child restraint system in a rear seat of the vehicle, unless the child is more than 40 pounds or 40 inches.

Garcia, who wrote the change, said, “Despite studies and educational campaigns by doctors and the National Highway Traffic Safety Administration, not enough parents are changing their behavior. An overwhelming number of parents still place their children in a forward-facing position too early.

The new Pennsylvania law already went into effect this past summer.

Pennsylvania lawmakers increased safety protections for its youngest passengers. Now all children under age two, who haven’t outgrown manufacturers’ limits for their car seat, are required to be buckled into an approved rear-facing child safety seat in the back seat.

Officers enforcing the law will give verbal warnings the first year. After that, each violation will carry a penalty of $75 in addition to costs and fees, increasing the total to $125 according to the state Department of Transportation website.

Unfortunately the Wisconsin bill failed to pass into law.

Tennessee lawmakers withdrew a similar bill seeking to raise the rear-facing requirement to age 2 during the state’s 2016 legislative session.

New Jersey and Oklahoma made similar changes to their car seat laws last year. AAA is working to get other states to follow suit.

What is better; detailed or “vague” laws?

States say the increased requirements replace a law that critics said was too vague. Unfortunately, Safe Ride 4 Kids has found, often times when legislatures try to be “less vague” in their car seat laws, the laws actually end up not allowing for best practice.

For instance, Pennsylvania law says children four years of age or older but under eight years of age must be restrained with a seat belt in a booster seat. Best practice says it is safer to remain in a 5-point forward-facing harness seat until the child outgrows the seat by height or weight. Based on this law, it would be illegal for parents to keep their children safer in a 5-point harness or using other, possibly safer, belt-positioning options like the RideSafer travel vest.

The RideSafer is a federally certified child restraint for children age 3 and up but a few state laws make it confusing to know if it is allowed in their state when they make their law “detailed” and mention booster seats.

Would it be better to keep it more vague? Would it be easier if a law could simply state:

And really if you are following best practice, lawmakers wouldn’t even need the first bullet point. But that may be wishful thinking.

We want to know, would you find it more or less confusing to make the law more vague? Would knowing where to find current best practices (here) change your answer? Share your comments below.